All the advantages of LEG technology in a low profile design. 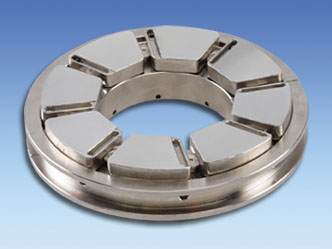 Kingsbury has adapted its Leading Edge Groove lubrication technology to a new low-profile design. The new LEG® SlimLine is a fully equalizing thrust bearing with all the attributes of our standard LEG product, but in a thinner profile.

In this new model, each pad is designed to carry an equal amount of thrust load. Leveling plates on the back of the bearing reduce the chance of one pad being more highly loaded than another. The leveling plates, combined with a spherical pad support, also ensure that the thrust bearing face becomes perfectly aligned with the rotating thrust collar.

Important design features, such as Kingsbury's 360° pad pivot arrangement as well as conservative load ratings, allow you to confidently specify the LEG SlimLine in even the toughest applications. Perfect for retrofit, the LEG SlimLine may be specified for one-to-one replacement for tapered land or low-profile non-equalizing tilt-pad bearings in existing applications, reducing downtime and improving overall performance. ISO standards are used for all dimensional tolerances.


Download SlimLine Product Information
Get A Quote
Get More Information


The Advantages of LEG Technology

Leading Edge Groove (LEG) technology, introduced by Kingsbury in 1984, has revolutionized the world of hydrodynamic bearings. They have made it possible for the world's leading equipment manufacturers to simultaneously increase bearing capacity, reduce friction losses and hold babbitt temperatures within acceptable limits. When compared to a standard thrust bearing, the advanced design LEG SlimLine bearing can:

While the general arrangement of the LEG SlimLine appears to be very familiar, certain key features make it superior to the other tilt-pad bearings in use today. 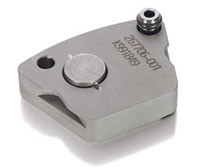 All SlimLine bearing pads are provided with Leading Edge Groove (LEG) lubrication grooves to improve oil flow, reduce power loss, reduce friction and reduce pad temperature. Bearings are designed for a specific direction of rotation, allowing the use of offset pivots in the pads to increase the load-carrying capacity.

The pad bodies are typically constructed of low carbon steel with a high tin content babbitt face, although material selection can be engineered to meet unusual applications.

The low-profile equalizing LEG SlimLine has a distinctive raised button or support on the back of the pad to allow full 360° pivot, rather than the more familiar rocking strip that only allows the pad to tilt from side to side. Pad buttons are made of carbon tool steel, heat treated to 52 to 57 Rockwell C to prevent flattening of the spherical pivot. Kingsbury tests indicate that this feature contributes to uniform temperatures among all pads of a given bearing. 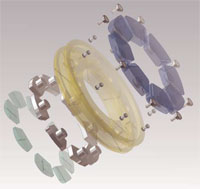 Leveling plates are assembled inside carrier ring and evenly distribute the load among the individual pads. The unique design of Kingsbury's low-profile leveling plates permits installation of the bearing in an extremely shallow envelope, allowing for retrofits in spaces where only a non-equalizing bearing could fit previously.

Carrier rings are manufactured to exacting ISO tolerances and are usually supplied split in halves to allow simple installation in tough-to-reach applications. Standard material of construction is low carbon steel.

Pads are held in place by a retaining fastener, and both can be easily removed to facilitate service or replacement.

Passageways drilled in the back of the carrier ring provide oil to the tilting pads through individual oil feed tubes, ensuring the even distribution of the lubricant across the bearing surface. The oil feed tubes are designed so that the pad is free to pivot. This ensures that all oil is fed directly to the leading edge of the pad face.

The bearing housing requirements for the LEG SlimLine bearing are similar to those of standard thrust bearings. The use of oil seals is not required since the inlet oil is confined to passages within the carrier ring assembly. Fresh oil enters the bearing through an annulus located at the outside diameter of the carrier ring. The discharge space should be large enough to minimize contact between the expelled oil and the rotating collar. The oil outlet should be amply sized so that oil can flow freely from the bearing cavity. 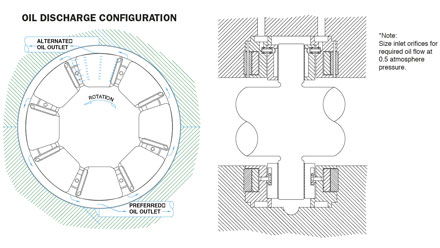 The LEG SlimLine bearing has proven itself through exhaustive testing and field research to represent the ultimate in directed lubrication technology. Yet the design concept is remarkably – and elegantly – simple.

The bearing shoes and aligning ring are constructed so that cool inlet oil flows from the leading edge groove directly into the oil film. The cool oil in the oil film wedge insulates the babbitt face from the hot oil carried over by the rotating collar.

Unlike the LEG SlimLine bearing, spray-fed bearings introduce the lubricant between the bearing surfaces, not directly onto them. This can result in uneven bearing lubrication and the need to supply impractically high pressure to effectively scour off the hot oil adhering to the thrust collar. There is also a tendency of the small jet holes to clog with foreign material, further hampering distribution. Greater friction, higher operating temperatures and more power loss are the ultimate results.

With the LEG, friction power losses are lower than in flooded and spray feed bearings due to the reduced oil flow. The flow of cool oil over the leading edge lowers pad surface temperatures, increasing the SlimLine's capacity.

The resulting performance improvements are shown in these graphs.